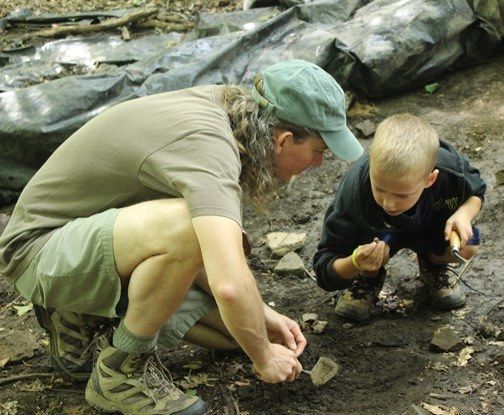 Western Pennsylvania history comes alive as students unearth artifacts, clean what they have found, and try to identify these clues to the past. Some students have found artifacts dating back one thousand years. In order to preserve the integrity of the archaeological site, group size may be limited.

This hike brings students in contact with historic homestead sites that were settled between 120 and 180 years ago. Students learn to look for clues of early settlement and explore a former home site that was built along the historic Venango Trail.

Central Western Pennsylvania was the "Western Frontier" from about 1790 until about 1810. The people who settled the area were living a hard life trying to survive. They faced many hardships in clearing the virgin forest, building shelter, planting crops, raising a family, and surviving Native American raiding parties. People were not living a bucolic life in a log cabin. They were working very hard to provide for themselves on land that they owned. Many people came for the free land after serving several years of servitude in the East, but not all were able to survive the rigors of the frontier. This time period is seldom studied by students as they learn Pennsylvanian and American history. However, we can gain great insight into the young United States of America by learning about the hard working souls on the Pennsylvania frontier.

Primitive Shelter - It took several months to clear land and build a cabin on the frontier, so most families lived in a three-sided shelter while they constructed their cabin. Students will be led in the construction of a shelter using the natural resources at hand. Discussion will focus on the survival needs of the first settlers and what resources they had available.

Children's Games on the Frontier - Growing up on the frontier did not allow children much free time, but they still found time to play various games. These were simple games that did not require many resources and used equipment that could be readily made at home. Many of these games also taught skills that were needed in daily life. Students will participate in several games and discuss what children may have learned from mastering a game.

Frontier Chores - Children on the frontier were part of the family workforce. In this activity, students will be introduced to some of the many daily or seasonal chores that young people were responsible for.

Food - from Soil to Mouth - Raising or obtaining food was a chief focus of daily pioneer life. Students will use a homemade hoe to break the ground for planting, participate in grinding grain or nuts, and taste some of the everyday foods eaten on the frontier. (For an additional fee, this activity can be expanded into a meal.)

Edible and Medicinal Wild Plants - Wild foods were a significant part of a pioneer's diet and most plants had a medicinal use, since physicians were hundreds of miles away.Students will explore the forests at Lutherlyn and discover the uses of local flora. Tasting of edible varieties is a possibility!

The history of the Semiconon Valley parallels much of the history of western PA. This 2.3 mile hike allows students to explore a site used by Native Americans, a dam and homestead site associated with a former grist mill, the site of a former coal mine (and resulting pollution), and an abandoned gas well.

The following modules may be combined to form one activity, which focuses on some of the life skills used by Native American peoples of the woodlands.

Games were a great way for Native American children to develop the physical and mental skills needed to live in the forest. Students learn and play several games from the Native American tradition and discuss what skills the games may help develop.

Students learn about two methods used by woodland tribes to record or share information – sign language and pictographs. Students learn basic signs and phrases, as well as how to read a simple pictograph.

Native Americans used the forest around them to provide them with shelter. Students will construct a debris shelter and visit a rock shelter that was used by Native Americans approximately 250 years ago. An archaeological dig is currently taking place at the rock shelter.

Capturing food was a major life skill for Native Americans. Students will learn about several small game traps and construct a demonstration one.